As per Keysight Technologies’ Security Operations Effectiveness survey, security professionals are overconfident in their tools with 50 per cent of respondents reporting that they have experienced a security breach because one or more of their security products was not working as expected.

The Security Operations Effectiveness survey found that just over half (57 per cent) of security professionals were confident their current security solutions are working as intended. Yet only 35 per cent of survey respondents stated that they conduct testing to ensure their security products are configured and operating as they expect. To close this gap, 86 per cent of respondents see strong value in security test solutions that can actively test their company’s security products and posture, using both internal and external attack vectors.

Commenting on the development, Scott Register, vice president, security solutions at Keysight’s network applications & security group, said, “Enterprises are faced with a continuous stream of cyberattacks that threaten their businesses, and in many cases they attempt to deal with these by buying more security tools. Yet they don’t know whether these products are delivering the protection they expect. The disconnect is when good security tools are misconfigured or security teams lack the skills to use their tools. This situation leads to overspending on overlapping tools and compromises an organisation’s security posture. Ongoing testing of security solutions would give organisations the proof and confidence that they are protected, but also would provide the opportunity to save resources.” 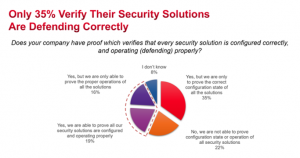 Key findings from the ‘Security Operations Effectiveness’ survey include:

Keysight commissioned dimensional research to conduct the survey in November 2019. A total of 307 participants that strategise, architect, manage and operate enterprise security solutions completed the survey. Participants were from all five continents. They represented large (48 per cent), medium (41 per cent), and small (11 per cent) organisations across a wide variety of industries.

Public cloud deployments can contribute $100 billion and 240,000 jobs to the Indian economy by 2023, says Google Cloud and BCG report

Indian railways deploys over 2,600 satellite-based terminals under Phase I of RTIS project